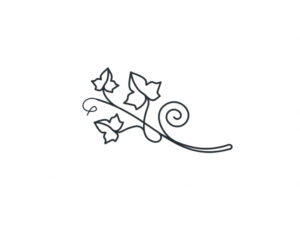 The Makeover of Two Settees Part Two: Reconstructing the Down Seat Cushion

So as luck would have it, a couple months after I purchased the first settee for our home I was checking IG and I saw a picture of my settee for sale at Goodland Antiques.  What? TWO of them exist??? I knew I wanted the second to reupholster for resale.  I sent a note to Ann, the shop owner and placed my claim on it.

The biggest surprise with these pieces was the state of the cushions.  The interior fabric was almost completely disintegrated.  So I need to remove the feathers and reconstruct the interior cushions.  I suppose if the exterior fabric did not have piping or a zipper you could just leave the exterior fabric on and make a new cover for it.  But my cushions had both.   In my experience, every single vintage furniture piece has a surprise or two that you find once you get to work changing things up.  There really is no way that the Antique shop I purchased them from would have known that if I wanted to redo them, I would have to reconstruct the cushions.  They were in perfect working order if I kept the fabric that they had on them on them.  That is all you can expect when buying a piece of vintage furniture. 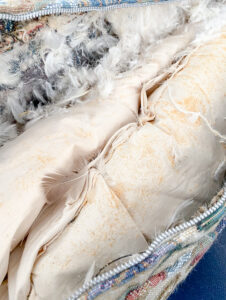 see the feathers are about to take flight

For the purpose of this being a tutorial, for this section I am going to go through the process that I used on the second settee to reconstruct the seat cushion.  Because I did in fact learn more the second time around.  Although I am pleased with the results of the first settee, the second is better.

I made a pattern of the seat with some paper.  I did this by placing a large piece of paper. You can do this with wrapping paper.  Then I carefully traced around the seat and cut it out.  I double checked my work by replacing the paper on the seat and saw that there were some spots that I cut too short.  I taped more paper on those edges and cut true to size. 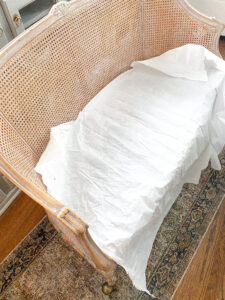 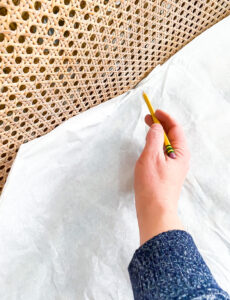 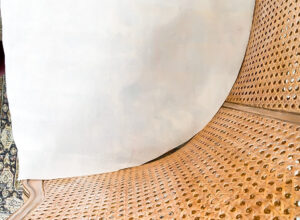 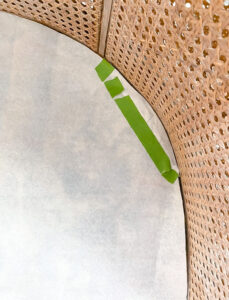 Into the down feathers I went.  I did my best to carefully remove the previous cushion.  I tried to work on this in a clean, contained space because feathers will get everywhere and I wanted to chase down as many as could.  I found the second settee’s cushion to be in slightly more intact condition, not working condition, but it at least provided more clues as how to reconstruct.  The cushion was a down envelope around a piece of two inch high foam. 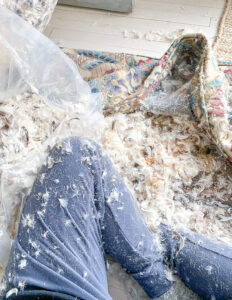 The cushion was a down envelope around a piece of two inch high foam.  I carefully removed the foam and tried to keep the feathers contained in the original cushion cover.  The foam was not in great condition, but I was able to use it as a pattern for new piece of foam.  I traced the old foam piece onto a new foam piece and used an electric carving knife to cut it out. 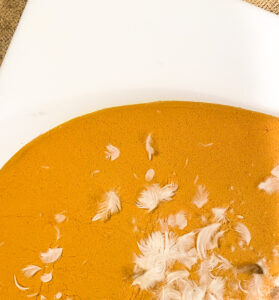 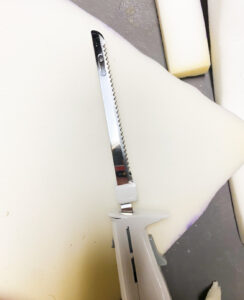 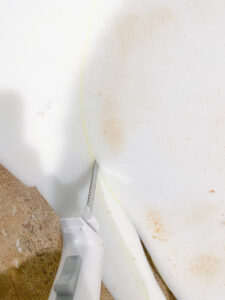 I set the foam piece to the side, while I worked on redoing the envelope part for the cushion.  I found that the original cushion had two thin, top and bottom feather cushions that were held together by strip of 4 inch fabric edges.  The back of the cushion allowed space for foam to slide in in-between the two feather cushions.  So in order to recreate this I needed 4 pieces of liner fabric (I actually just used an old clean sheet) cut to size, I cut the fabric one each 2 inches larger around the entire pattern.  If I were sewing a cushion cover I would cut the pieces 1/2 inch greater than the pattern to allow for 1/2 seam allowance, and then I end up with a snug fit.  But since this would be used for stuffing a plump cushion I wanted to add bit more fabric make it easier to stuff and allow room for the feathers.  I also cut a strip of 4 inch fabric to go around the edges of the cushion.  My cushion was 3 inches high, so 4 inches was right with a 1/2 inch seam allowance.  I did not worry about adding extra fabric to this strip like I did for the top and bottom pieces. 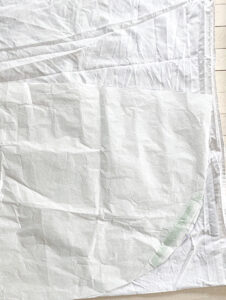 These steps are a bit tricky for me to explain, and I am visual so I attempted a diagram.  Hopefully it helps, not confuses you more: 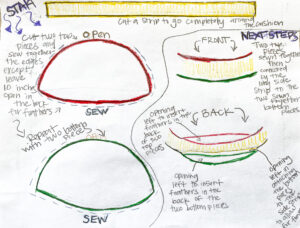 With a 1/2 inch seam allowance, I sewed two of the four of the large pieces together leaving approximately a 10 inch opening in the back to allow for stuffing feathers.  Then I repeated this with two the last two pieces.  I turned these right side out, which I don’t really think is entirely necessry. This will be completely covered and if you left it wrong side out it would be fine.  Then I took the strip of 4 inch fabric and sewed it all the way around the edges of one of the finished larger pieces with a 1/2 seam allowance, careful  not to sew the opening for feathers closed.  Then I did the same for the second pieces, sewing it onto the other side of the strip.  But this time I did not sew it completely around, I left approximately 24 inches open in the back in addition to the opening for the feathers.  This allows an opening for the foam.  In doing this it left unfinished edges on the 4 inch strip. 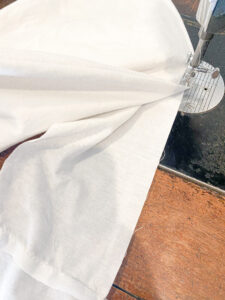 I did my best to stuff the down feathers evenly between the top and bottom cushions.  I stitched up the openings for the feathers to keep them contained, careful to still allow for the opening of the foam. 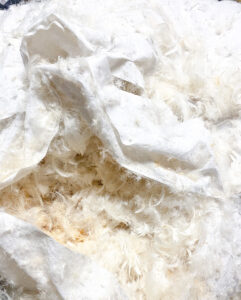 I stuffed the foam in place in the envelope of feathers.  I actually found that my foam felt a little too substantial for the cushion, if made more of a flat look versus a pillow like cushion.  I believe this is because the foam was just in so much better condition and possible quality versus the old one.  So I  played with the size by trimming the sides to get it the right feel. 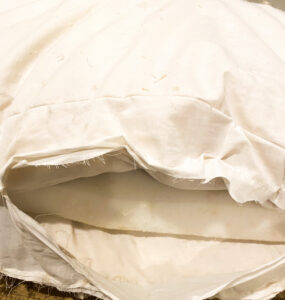 I am going to let you decide if this was necessary.  Originally I thought that the cushion could just be stuffed into another liner and be good to go, not a complete reconstruction.  Since I had it on hand, I thought I would use it.  I had already cut fabric to create this:

– I did this using duck canvas, leaving an extra 2 inches on all sides of the pattern and cutting a 4 inch strip for the sides.

-I sewed the 4 inch strip completely around the top.

– I connected the ends of the 4 inch fabric and sewed those together.

-Next is sewing the bottom part to the other side of the 4 inch strip.  leaving about 20 inches open to allow for stuffing the cushion in.

-Turn the piece right side out.  And stuff the cushion in place.  Finally stitch up the back opening.

To add a little extra padding and making the cushion have a full look, I added a layer of Dacron.  I wrapped the cushion carefully in Dacron as not to change the shape of the cushion.  If you prefer more precision you could use the pattern of the seat and cut two pieces allowing an extra 1/2-1 inches on each side for stitching and 4 inch strip for the sides.  When the Dacron is in place, I secured it with a loose hand whip stitch.  This completed the reconstruction of the cushion, and in the end I had a very high quality cushion that used all the precious down that was still in excellent working condition after decades of use. 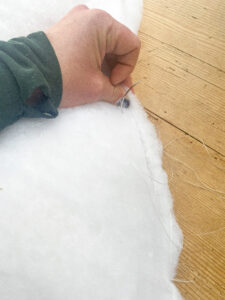 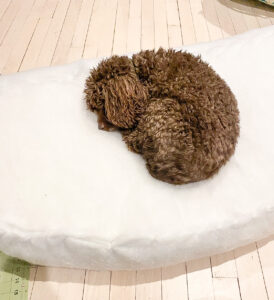 Nice and comfy, this one was probably the cushion for my settee, I do my best to keep my dogs away from items I try to sell.  But sometimes they do sneak in there.

Next up is making the cushion cover… 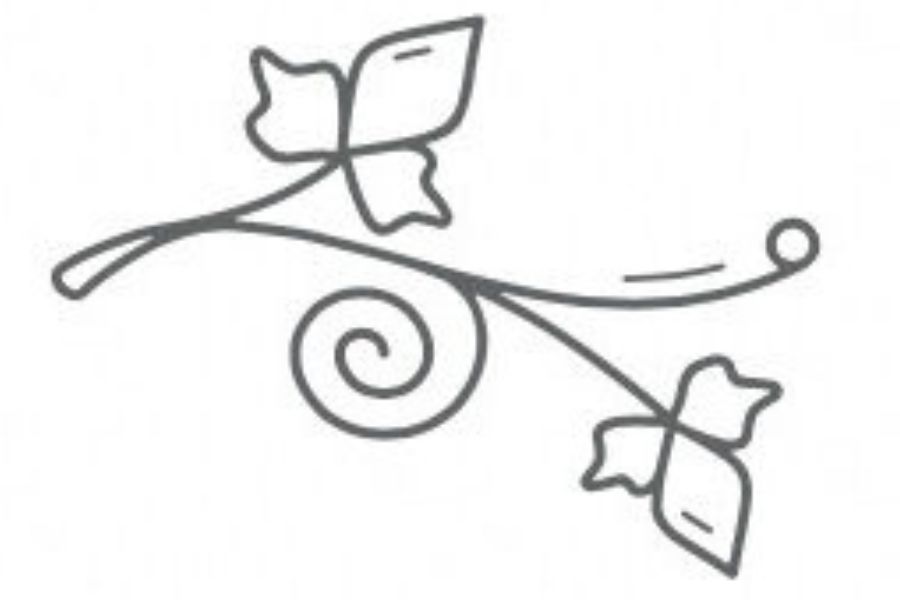 Copyright ©2023 All Rights Reserved. Web Design by i4 Solutions